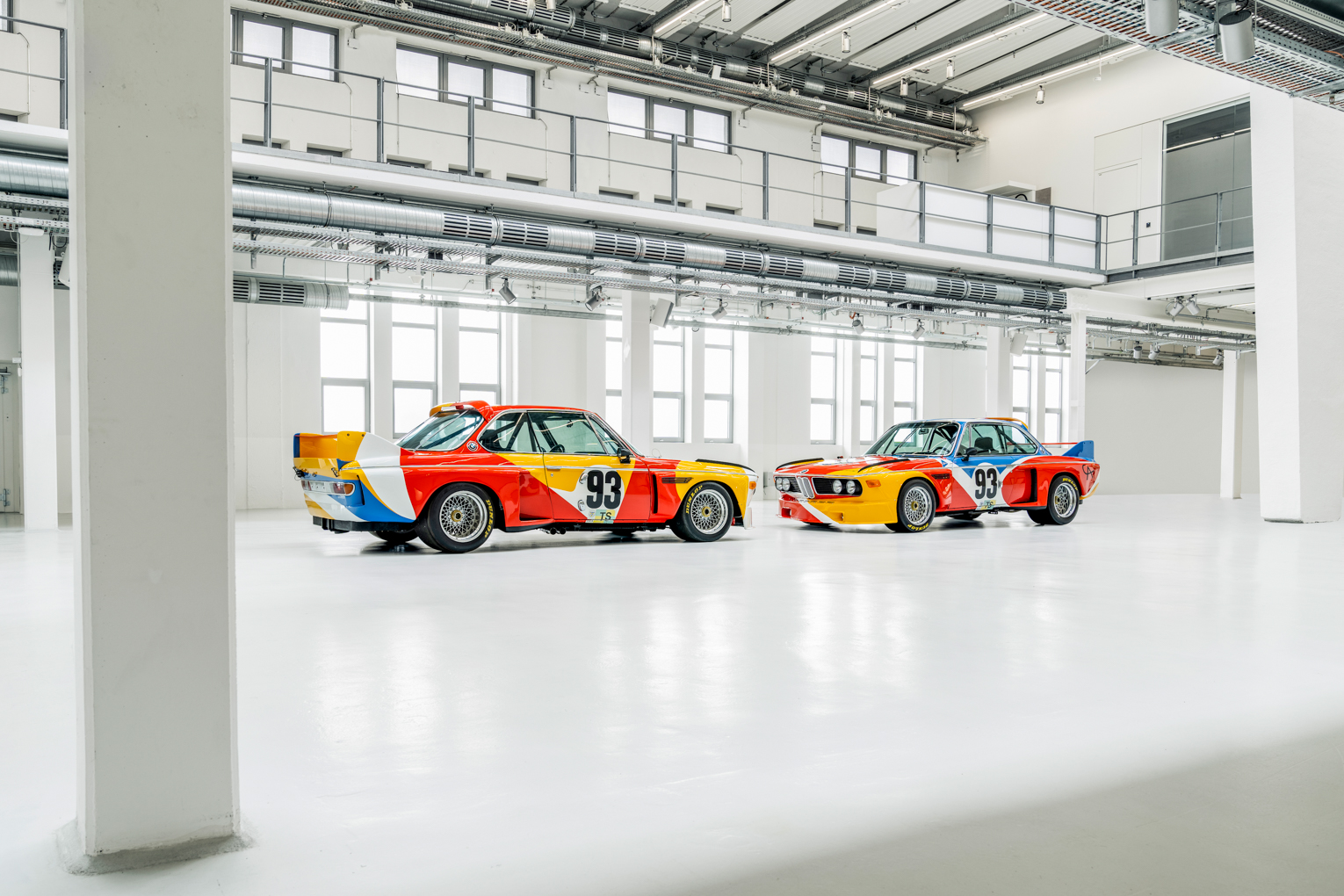 Calder Foundation and BMW are pleased to announce the presentation of the Calder BMW Art Car (Artist’s Proof) for the opening day of “Alexander Calder: Minimal / Maximal” at the Neue Nationalgalerie in Berlin on August 22, 2021. Conceived by BMW Group Classic for the Calder Foundation, the Artist’s Proof realizes Calder’s dream of creating his own example of the first BMW Art Car, operating as the kinetic work of art that the artist intended.

Alexander S. C. Rower, grandson of the artist and president of the Calder Foundation, recalls, “I first encountered the BMW Art Car as a kid at the opening of my grandfather’s far-ranging retrospective at the Whitney Museum in 1976. I asked him about the roar of its M49 engine, and he smiled and told me he wanted to make one for himself. He died just a few weeks later. Ever since, I have dreamed of realizing his wish to bring the car to life to experience its full glory in motion. I am thrilled that that day has finally come, and that the car will be activated for the opening of the Neue Nationalgalerie’s ‘Minimal / Maximal’ exhibition, which highlights the key element of social activation so fundamental to Calder’s work.”

It is important to note that the Artist’s Proof is not a replica, clone, copy, reproduction, facsimile, or 1:1 of the 1975 Calder BMW Art Car. Rather, it is the identical Artist’s Proof that Calder was entitled to but was never realized until now. Meticulously built from an original BMW 3.0 CSL, the Artist’s Proof will carry the same Vehicle Identification Number, with the suffix “AP” (227592/AP).

The story behind Calder’s legendary BMW Art Car originated not in the automotive but rather the aeronautical sphere. In 1974, French auctioneer and racecar driver Hervé Poulain visited Calder at his studio in Saché, France, to propose translating the artist’s recent collaboration with Braniff International Airways into the world of cars; Calder’s painted DC-8-62 airplane, inaugurated in 1973, had been wildly successful. BMW and Poulain commissioned Calder to paint a design on a BMW to be raced at the 24 Heures du Mans in 1975. The result was a momentous collaboration that spurred an entire Art Car program at BMW—a prestigious, high-profile crossover with the art world. After Calder’s Art Car was raced at Le Mans, it was subsequently exhibited at the artist’s sprawling retrospective at the Whitney Museum of American Art in New York City in 1976, where it occupied a prominent place in the museum for the run of the exceptionally popular exhibition.

Poulain recalls, “It was a thrilling moment as a young driver to meet the great American artist Alexander Calder at his home in Saché. Racing what became the first in a storied tradition of prestigious Art Cars is a memory I will never forget. I am delighted that more people will now get to experience Calder’s vision, thanks to this new Artist’s Proof.”

The Calder Foundation and BMW Group Classic consulted with key members of the original team to realize this project, including not only Poulain but also Jochen Neerpasch, who was a key supporter of the BMW Art Car series from the beginning, and Walter Maurer, who did the technical painting of the Calder BMW Art Car in 1975 as well as of the Artist’s Proof in 2021.

Following its debut in Berlin, the Calder BMW Art Car (Artist’s Proof) will be presented at The Bridge in Bridgehampton, New York, on September 18, 2021. The Calder Foundation will subsequently lend Calder’s Artist’s Proof to exhibitions worldwide.

On the occasion of 50 years of its cultural engagement, BMW has recently joined forces with Acute Art to initiate a unique virtual exhibition. Since July 21 and for the first time ever, the BMW Art Car by Alexander Calder and the renowned BMW Art Car Collection are being exhibited in augmented reality (AR) via the free Acute Art app, marking the first time that the digital rolling sculptures are accessible to everyone around the world at any time.

Not only BMW Group Cultural Engagement but also the BMW 3.0 CSL celebrates its 50th anniversary in 2021. The BMW 3.0 CSL is not only a legend as a BMW Art Car. As a serial version, it was launched alongside the BMW 3.0 CSi in 1971 and was defined by the characteristics of its name: coupé, sport, lightweight. Produced in small series beginning in 1971, the lightweight coupés quickly became particularly important. The BMW 3.0 CSL was raced with the famous BMW Motorsport Works colors from 1973 on and triumphed six times in the European Touring Car Championship. The BMW 3.0 CSL is still one of the most iconic cars in the BMW automobile history.